Outbreak: Epidemics in a Connected World

Outbreak: Epidemics in a Connected World, which is hosted in conjunction with the Smithsonian Institute, highlights how pathogens can spread to people from wildlife and livestock, why some outbreaks become epidemics, and how human, animal, and environmental health are connected. The exhibit, a customizable “Do-It-Yourself” version of a larger display at the National Museum of Natural History, explores past and current epidemics through both global and local lenses. Working with other community organizations including the San Miguel County Health Department, Telluride Medical Center, and Pinhead Institute, we researched and developed content that tells the story of San Miguel County’s past experiences with contagion.

If These Walls Could Talk: Preservation and Change Stunning natural surroundings and unique Victorian charm give Telluride its special character. These buildings stand as eyewitnesses to a mining boomtown gone bust, and its rebirth as a ski destination. Imagine the stories they can tell! In 1961, Telluride was officially designated a National Historic Landmark District in special recognition of the historic mining character of the town. Thanks to historic preservation efforts, much of the town’s original architecture endures and 21st century Telluride remains a recognizable, historic mining town. That landmark status defines and shapes how people live in and visit our unique town. Maintaining this historic mining identity is an intensely passionate process; a balancing act between development and preservation.

The Valley Floor: Changing Identities of a Telluride Treasure Turning the corner towards Telluride is a magical moment. Seasons reveal either a lush meadow full of lumbering elk and scampering prairie dogs or an icy winter carpet surrounded by snowy sandstone cliffs. This breathtaking valley floor corridor provides a natural gateway to our box canyon town. From native people’s seasonal hunting grounds to placer mines and cattle grazing, the floor has a diverse and often tumultuous history. In 2007, after a long and emotional effort, the Town of Telluride acquired 572 acres of the Valley Floor through condemnation and today the floor is preserved as open space in perpetuity. This exhibit explored the history of the Telluride valley from its geological formation to the modern-day preservation of The Valley Floor. With breathtaking photos and hands-on interactives including a beaver lodge replica, this exhibit is fun and educational for the whole family!

Treasure Maps: Cartography of the American Southwest was the Museum’s 2016-17 annual exhibit, exploring shifting perspectives of the Southwest through the history of the maps that depict it. Because maps are necessarily a compromise of limited resources and knowledge, the American Southwest is a template in which the inaccuracies, blank spaces, and mythical elements tell the stories of its exploration and the possibilities that the American southwest has represented. As part of the exhibit, the Telluride Historical Museum collaborated with Telluride Mountain School, Pinhead Institute, Telluride Institute, The Hub, and Alpine Lumber to create an Augmented Reality Sandbox. The AR Sandbox uses a projector and a 3-D camera to view the surface of the sand and project real-time topographic lines onto the sand’s surface. The sandbox will also simulate watersheds, and after the exhibit closed, the sandbox is now co-owned by Pinhead Institute, Telluride Mountain School, and Telluride Institute, where it will be an ongoing part of the community watershed curricula. What was Telluride like before there were people? Before the ski resort, the mines and even the mountains? The Telluride Historical Museum’s 2015/2016 exhibit, Forces of Nature: Telluride’s Prehistoric Journey, delved into the dramatic and volatile powers that built the region we know today. Visitors uncovered carnivorous Allosaurus dinosaur fossils from the late Jurassic period and discovered what life was like for these fast, muscular reptiles. Visitors dived into the Western Interior Seaway, the shallow sea that covered Colorado and extended from the Gulf of Mexico to the Arctic Ocean. Visitors tested out the principles of Plate Tectonics, handled real Colorado fossils, and saw the gems and minerals formed through millions of years of volcanic activity. Lastly, visitors experienced how the Ice Age and the pressure of glaciers creeping along the valley carved out Telluride and set the scene for the first humans. Voices of Wartime: Telluride During World War II, explored the history of the Second World War through the unique lens of Telluride residents. A revealing look into how daily life changed—and did not change—during the War, the exhibit utilized the power of oral histories to capture the experiences of local residents and share them with a new generation. Surrounding the stories of Telluride locals during the War were images, artifacts, and newsreels explaining the War as a global conflict in greater depth.

In addition to artifacts in the Museum’s collection and those from local families, the
Museum used its designation as a Smithsonian affiliate to coordinate loans
from other affiliated museums, including the National World War II Museum and the
Chinese American Museum. Other community partners came together for the exhibit,
including the Telluride Daily Planet, Telluride Masons #56, Telluride Elks Lodge #692,
Telluride Rotary, and the American Legion Post 12. Powerful Currents, the Museum’s 2013 annual exhibit, explores the technological innovation behind the development of early hydroelectric projects in the San Juans. The exhibit includes artifacts from Ames Hydroelectric Generating Plant which, in 1891, achieved the first long distance commercial transmission of alternating current in the world, and the technology of early power plants like Ames and later Bridal Veil Falls. A Pelton wheel interactive, made possible by a generous donation from the Telluride Institute, will give visitors a hands-on experience of how water pressure and force is converted into electrical currents. Visitors will see this process in action with the miniature Pelton Wheel that powers a light bulb, and will be able to make their own electricity at our experiments stations. Sight and Sound: 125 years of art and music in Telluride

Ever hear the sound of a 1903 Gem Roller Organ? Are you curious about the very first painting of the Telluride Valley? Do you want to know Audrey’s story? How is a lithograph made?  Telluride is known for its music festivals and art culture, but what about the stories behind them?

Sight and Sound, Telluride Historical Museum’s 2012 annual exhibit, explores Telluride’s rich history of arts and music, from the earliest depictions by settlers and surveyors moving across the American West through the town’s eclectic group of artists, poets, and musicians of today.

Layin’ Down the Law: Telluride Lawmen, Outlaws, and Crimes

In 1889, Butch Cassidy robbed his first bank in Telluride, lawmen were considered gunslingers, and the town had 10 saloons and no church. Miners, cowboys and rustlers all found recluse in “the town without a bellyache,” and the outlaws rode through town with guns “a blazin.’”

From the time Telluride became a town in 1878 to the current peaceful destination it is today, Telluride has had its fair share of crime, thieving outlaws, and lawmen who kept order—sometimes. 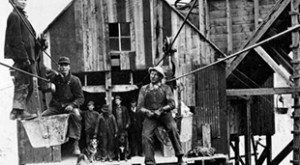